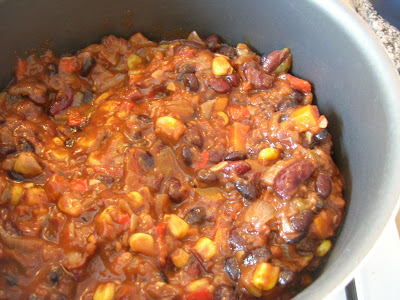 It's been chilly out and I needed something to warm me to my bones - something with spice! This recipe uses a packaged blend of finely chopped dried chilies and other spices that I found at Falabella (Narda Lepes, no 2 HOT) in place of chili powder - only because I couldn't find anything close enough in powder form. The same amount of chili powder can be substituted. The other spices include oregano and cayenne pepper (among other stuff) so I'd toss a little of that in too. I also used dried beans but you could use one can of each - black and kidney beans, drained. 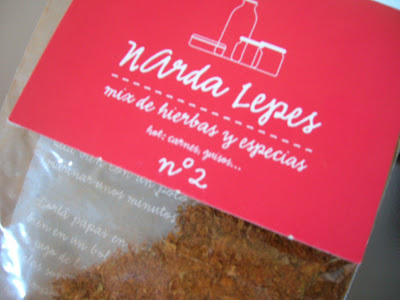 I used fresh tomatoes, peeled and crushed, because I read that canned tomatoes are actually somewhat toxic due to BPA. To easily peel tomatoes, cut an X into the bottom and drop into boiling water for about 15 seconds. Remove and, using a fork and knife, immediately peel skin off. It should almost fall off in 4 pieces. Cut out the core, chop up and smush a little with a fork. Let these rest in a bowl for a little while before adding to chili - they'll get a little juicy. 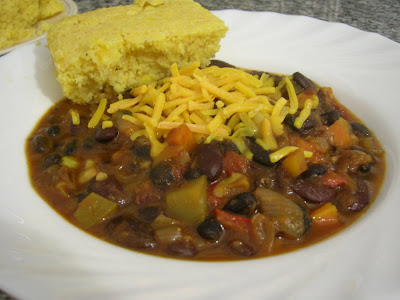 Chili sin Carne
*3-4 c. cooked or canned beans - I used about 1 1/2 c. (combined) dried black beans and kidney beans. Either soak overnight or bring to a boil, cover, remove from heat and let sit for an hour. Then simmer for one and a half hours - being careful not to let them dry up.
Chop and then saute onion, garlic, pepper and carrot in oil along with bay leaf until they start to soften. Add chopped zucchini and corn kernels and cook until soft, about 7 minutes. Add chili powder, cumin, and s&p and cook for 1 minute. Add tomatoes, cooked beans, stock, and tomato paste. Simmer for 30 minutes. Taste to adjust seasonings. Stir in cider vinegar and add water if you want it thiner. Simmer another 5 minutes or so. Remove bay leaf. Add cornbread (I only used 1 T. of sugar with this recipe) and toppings!
Save some for leftovers - it's even better on day 2! 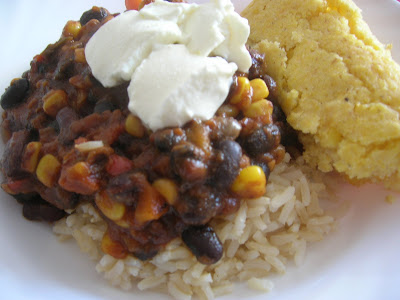 nice! i always make chili in my crockpot - it's super easy that way because i can throw in dried beans with all the other ingredients to cook.

Your chili looks fabulous. I just made a pot this past weekend when a friend came to visit, and it looked identical to yours except for the meat. ;)

I went to the Cabrales store in Mar del Plata recently, and they were selling Narda Lepes' line of spices and sauces. I would have bought the No. 2 Hot blend, but I just received a special delivery of chili powder from my family. Have you tried any of her other products?

I bought a HUGE container of chilli powder last year when I was in the states. Enchiladas have been on my mind lately.

I made a different chilli last week, it totally hit the spot! (Found chipotles in adobo at Disco --made me oh-so happy.) I like all the veggies you used in your's though.