Today is a memorial day of sorts, translated to Day of Remembrance for Truth and Justice. An Argentine's Facebook page looks like a ghost town today - everyone has taken down their profile pictures in remembrance of the 30,000 Argentines who disappeared during the Dirty War. Going Local Travel also blogged about this Facebook phenomenon here. NPR ran a recent story on on the war's continued effects here.
The holiday is new, created a few years ago, but I wonder if it's enough to really prevent those human rights violations from occurring again. The day's motto 'Nunca Mas' (Never Again) is, I think, misleading. While the holiday might serve as a reminder and a warning against mass atrocities, it's commonplace to find such on a smaller scale in daily life. I've complained about the overwhelming feeling of distrust for the police and justice system in this country, and the Argentine Post recently reported on the high level of corruption that Argentines believe is inherent in the political process. The outcome of this attitude is complete disrespect for government and authority, and sadly, for the holiday itself. Many Argentines hit the bars and clubs last night, taking advantage of the chance to sleep in. I know this because the streets were full of drunk, disrespectful, shouting people throughout the morning.
To really translate the message of remembrance into Argentine life would involve demanding truth and justice today. We need to replace Argentine cynicism with expectations. We should EXPECT more from all levels of government and stop ignoring the injustices that occur so frequently around us. We have to stop letting ignorant and abusive people and companies take advantage of us. We have to reclaim the right to walk down the street without being robbed, beaten, sexually harassed, or electrocuted by faulty power lines. I wonder what those 30,000 'disappeared' would have thought about the current situation here. They were a threat to the dictorial state because they read, they had ideas, and they knew the difference between right and wrong. Don't ignore the wrong Argentina! Pretending that you or your friends weren't robbed is today's equivalent of pretending that your neighbor didn't disappear. I know of one situation in which a person was robbed at gunpoint and then recognized the robber as a security guard at a grocery store - the robbery was not reported. Today's situation can easily escalate again to great injustice.
Today is meant to honor the memory of the disappeared - to do so, we have to protect our small, seemingly miniscule rights. Silence is not going to save you Argentina, it's smothering you.
Posted by meag at 11:31 AM No comments:

Eat, Drink, and be Green! 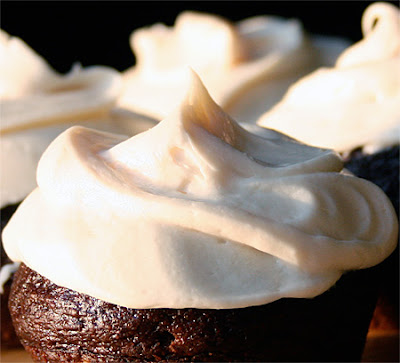 image from drinks are on me
This year I'm taking it easy on the green. Just a simple day with Irish Car Bomb cupcakes (and beer) to celebrate. I've found two amazing, similar recipes from Smitten Kitchen and Drinks are on Me that each feature a yummy Guinness-based chocolate batter.
I also came across the Working Holiday Agreement, which allows students and recent grads from Ireland and the US to live and work in each others' country for a year. Wish I would have known about this sooner! Still, thought it would be nice to pass along today.
Saint Patrick was a gentleman,
Who through strategy and stealth,
Drove all the snakes from Ireland,
Here’s a toasting to his health.
But not too many toastings
Lest you lose yourself and then
Forget the good Saint Patrick
And see all those snakes again.

Well, the immigration office's 'system' is apparently functioning again. I know this because they printed out a fee page which required me to pay 10 pesos to renew my temporary permanent residence status for another 3 months. Of course, in order to pay the fee I had to go stand in a line at a bank and then return to the immigration office. We were really upset that they charged us a fee to renew this crappy status when they openly admit that we committed no wrongdoing. It's up to the Argentine police to check my INTERPOL records, but they're busy and haven't gotten around to it. However, when we said that this was unfair they blamed me for being American - "Your country is the only one that doesn't sign police records, so..." - so what?!? So I deserve this delay and additional fee because you ask for things that you won't accept and you blame me for your process?? And they said that I would have to pay the fee for each renewal, hinting at the fact that I probably won't be getting permanent residency in 3 months either. Thanks Argentina. You're a real pal.
Posted by meag at 2:08 PM 2 comments:

Bureaucracy in this country is a pain in my ass. Listen, I know that it's a pain everywhere so this isn't just me venting about Argentina - I'm simply passing my experience along.

As I mentioned, upon complete submission of my documents and proof of marriage to an Argentine I was issued a temporary version of permanent residency - which seems to be of absolutely no use since I couldn't even get a Carrefour credit card without a DNI. Well, being temporary, it's expiring and I should have been issued the permanent version by now. We've checked with immigration several times and they finally admitted that the FBI record requirement is a hoax. Since the FBI doesn't sign the Good Conduct Certificate, it's unacceptable to this country. However, they KNOW that the FBI doesn't provide a signature but they still make you go through the hassle of getting the information anyway. Really, they're checking my INTERPOL records to verify that I'm not an international criminal and apparently this is the job of the Argentine police. However, it seems to take a very long time for someone to enter my name into the online database to do this search so they're going to issue me another temporary permanent residency for 3 months. However, we've been twice this week and their system has been 'down' so we'll just have to go back next week.

Why does this matter? It matters because I can't apply for a DNI - the Argentine equivalent of a social security number - without permanent residency. And without a DNI (or proof of starting the DNI process) I can't file a Petition for Alien Relative (the first step in the US immigration visa process) at the US Embassy in Buenos Aires. I'd have to file in the States. (According to the 'attached eligibility requirements' link on the embassy's site.) In addition, we're having trouble getting a marriage book - it's like an ID for proving your nuptials - that everyone has to pay for and have. Above is a picture of us posing with a prop marriage book. Apparently, they've been out of stock for, oh, several years now. Every now and then they'll get a shipment but it seems these are usually doled out to friends of the Registro's workers. Guille went in and confronted them about this today. They said that they're first come first served. Not in the order that you get married, but in the sense that if you happen to pop by one day when these rare surprise shipments arrive then of course they'll give you one, if there are any left. I mean, why would they bother to let you know that something of importance that you paid for was available? Or, better yet, why would they bother to actually mail it to you? These are questions that are, honestly, silly to ask.