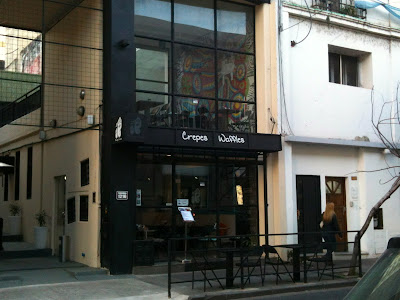 So there's this block that I've mentioned before because of a spacious Starbucks and my favorite pizzeria. I want to move to this block because now it's also home to Rosario's first creperie, Manjula Crepes. 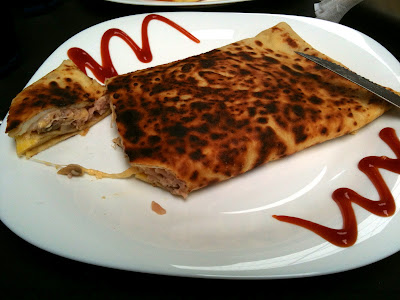 They've got a full menu of both savory and sweet crepes so you can have a full crepe meal! Of course, I'm partial to anything with Nutella. And they have waffles too! 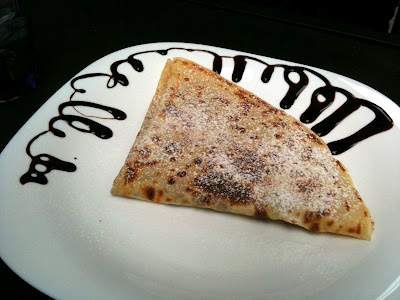 Manjula has a casual atmosphere and you order at the counter, something that's actually quite unusual here. They also have a patio to the side with those outdoor heater things. And the patio is dog-friendly!

The creperie is named after the character (Apu's wife) on the Simpsons -- and the same owners also have a shawarma/falafel place called Apu's. How sweet...and savory!

Find Manjula at Tucuman 1216, along with all the rest of my favorite spots on the block. Just ignore that giant gym on the corner ;)
Posted by meag at 11:18 AM 4 comments: 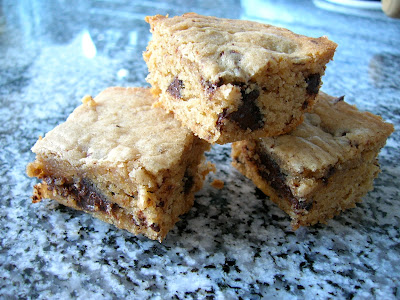 Mostly, I make brownies. But after a recent conversation about peanut butter (and having found that several of my students hadn't tried it) I thought about making a peanut butter version of blondies, and I'm glad I did. It adds just a touch of something special to dress up blondies and make them worthy competition of their all-chocolate cousins.

Peanut Butter Chocolate Chunk Blondies
from Two Tiny Kitchens
The original recipe calls for a 9x9 inch baking pan, but I used an 8x12 pan and wouldn't go any smaller.

Cream together peanut butter and butter, gradually blend in brown sugar, white sugar, eggs and vanilla; mix until fluffy. Combine flour, baking powder and salt and stir into the butter mixture until well blended (I went ahead and used the hand mixer for this since it's somewhat heavy). Fold in chocolate chunks.

Bake at 375F/175C in a greased pan for 30-35 minutes, or until the top springs back when touched. (I actually cooked it for about 35-40 minutes, but the edges were not as gooey - still, I wanted to be sure the center was fully baked.) Cool and cut into small squares. 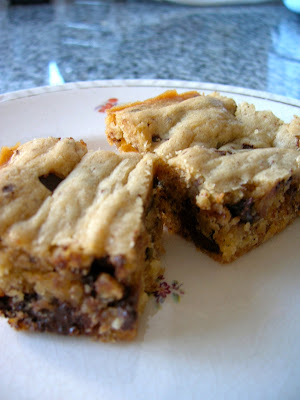 To comment on my changes: I used less sugar and it was still perfectly sweet enough. I added an extra pinch of salt (after tasting the batter) because the most common brand here (Sytari) is not salty like American peanut butter. And, yes, I cooked it longer than most recipes require.

I don't know why these are served in small squares, but my great-grandmother cut them the same way. I guess the idea is to make people happy but not fat. :) Portion control. Unless you eat them all. With ice cream. Whoops.