I finally found Spanish class that speaks the same language I do. And by that, I mean that there's a teacher speaking Spanish and a student 'answering' in English. My version of Spanish (or Castellano) is a half-in, half-out sort of deal. I'm not willing to commit to speaking completely in this god-forsaken language but I'll throw out what I know to complete a sentence...as in "Gimme another glass of cerveza, por favor."

So, when Bueno, entonces asked me to review their language videos I was delighted to see someone with a similar attitude struggling along! Honestly, it is helpful and I am learning but mostly it just makes me feel good about myself to know that I'm not the only loser in Argentina (no offense, David). Plus, Jimena speaks so articulately that I feel like maybe I do understand Spanish when I watch these videos.

To find the series helpful, I think you do need somewhat of a background in Spanish. My background is having started Spanish classes several times at a variety of institutions. (I can't tell you how well I know the vocabulary for school supplies.) Going through the first week of classes, I've been reminded of some of the basics and now we're pilling stuff on top. Useful stuff, like 'Don't bust my balls' and 'I'm useless.' I was hoping that I could just watch and remember most of the new phrases - and I did for some, like the proper time to use 'dale' - but by the third lesson I started taking notes. It provides an opportunity for learning alongside a little sarcasm (the best medicine). And I'm learning all kinds of inappropriate vocabulary and phrases that I wouldn't be able to ask my Spanish tutor about (without blushing). I also love that David doesn't hold back with his frustrations about Spanish - ahhh, thank you, it IS a sexist language!

Anyway, as I said, I've watched a week's worth of Bueno, entonces... - 6 classes. I've been having trouble finding time to watch an entire 35-40 minute episode every day so it may take me a little longer but I think a little extra time is great to actually practice using what I learn. The real test will be to see if I get a better handle on the past tenses from these videos.

I'm really excited to finish the series and it's nice to have some control over learning (meaning I can wear pjs and I don't have to go to class and be nice if I'm in a bad mood, etc). A lot of people seem to like it for their iPods and I would definitely have watched it while on the subway in NYC but I'm afraid I'll get mugged if I try to do something like that in public here. I just watch in the comfort (and safety) of my home - usually while eating breakfast or ice cream. 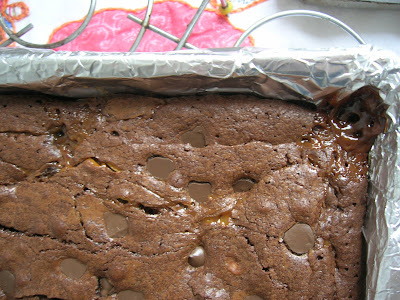 I debated what to call these for a while. 'Everything But the Kitchen Sink Brownies'? Too long. 'If It Ain't Broke Brownies'? Confusing. 'Turtle Brownies'? Eh. 'Dulce de Leche Swirl Brownies'? Not descriptive enough. In the end it does't matter. They're superb. Not to mention they're the lovechild of Joy the Baker's Old School Fudge Brownies mixed with a bit of inspiration from David Lebovitz's Dulce de Leche Brownie recipe. 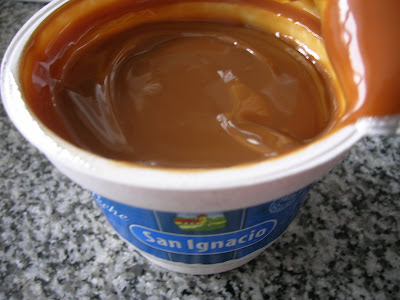 I thought about just making the entire DL recipe but I'm so addicted to Joy's batter that I figured 'if it ain't broke, don't fix it' (hence the name consideration). Typically, I'll make these brownies with walnuts and chocolate chunks and they're divine. But I've been meaning to toss in some readily available, always in abundance dulce de leche. And so I did. Heaven help me.
Everything Brownies 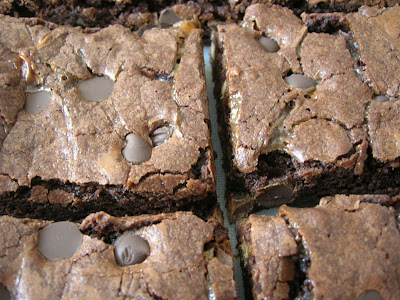 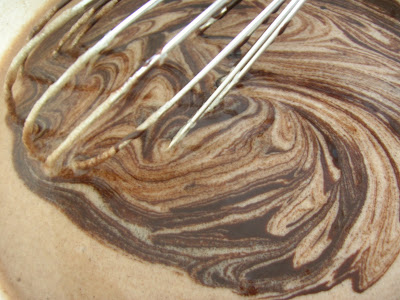 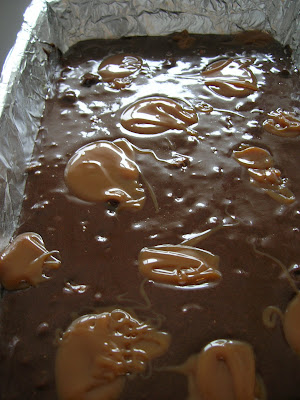 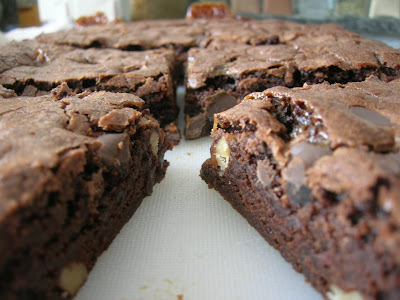 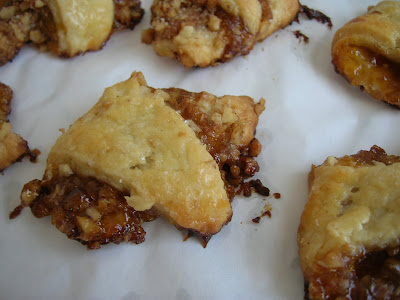 I've spent my entire life picking raisins out of cinnamon rolls, cookies, cakes, scones, pies. You name it, I've picked a raisin out of it. It's not that I detest raisins entirely, not at all. In fact, I've always enjoyed a box of Sunmaid raisins straight from the refrigerator and you'll find me mixing Raisinetes with my popcorn at the movies. But if it's been baked, plumped or heated - keep it at a reasonable distance - I've taken out a restraining order against it.
And so I'm making a traditional raisin dessert and leaving out the raisins - no need for me to pick them out of my own cooking. My apologies to any religious or ethnic groups that this offends. Yes, I'm a food globalizer.
In truth, there are a million varieties of rugelach (rugalach?) so I'm not really committing any new offenses to this amazing pastry. Still, making this clearly sacred cookie was an obvious reminder that I'm sooo not one of God's chosen people. I burned my thumb making the messiest, most unattractive rugelach I've ever seen.
I wanted to make both the apricot and the chocolate ruglelach found here. Only to realize that this recipe might be some sort of trap - for one thing 16 x 4 does not equal 50. I thought perhaps it was an honest mistake and decided to cut each circle into 12 pieces instead of 16. But the 1/2 inch thickness was way off. I googled the original author of the recipe Joan Nathan and found the correct instructions here. 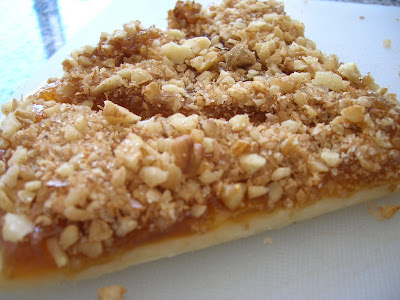 I tried the apricot first; after seeing the mess that it turned out to be I looked up instructions on YouTube.
So it seems that the filling should really be spread in a ring and that one cup of jelly is quite excessive. (At this point, I remembered that episode of Sex and the City where Charlotte had to beg to be Jewish three times to prove her dedication.)
The dough was tricky to work with, being so sticky, and required that I roll it out between sheets of wax paper, then refrigerate for 15 minutes before removing paper, then adding filling and trying to roll-up, but if it got too sticky again in the few moments that it was out, I had to refrigerate again in order to roll without breaking the dough.
In the end, it was delicious and surprisingly edible. I changed the fillings a bit, as reflected below. I used mini chocolate chips but will only use dark chocolate in the future - probably without the sugar. Also, when she says to immediately remove from the baking sheet and place on a wire rack she isn't kidding. Don't think to yourself - ah, my wire rack doesn't really fit these things, I'll put parchment paper over it so they don't fall through. You'll be picking paper off of your cookies for half an hour.
Rugelach Dough
Apricot Filling
Chocolate Filling
1 large egg, beaten
1/4 cup sugar
Combine cream cheese, butter, powdered sugar, salt, lemon juice and vanilla in food processor. Pulse a few times before adding flour then pulse until soft dough is formed. (I used chunks of cool butter to make a flaky crust, some recipes instruct to cream the cheese and butter together--do whatever works for you). Place dough in bowl, cover and refrigerate for at least an hour. Divide into 4 balls and roll out between sheets of wax paper into a 9 inch circle. (This is where I had to refrigerate the dough again for about 15 minutes).
Apricot filling:
Spoon jam onto the rolled-out dough (steering clear of the edges and middle). Combine the rest of the ingredients and sprinkle on top of jam. Slice dough into 12 wedges. Roll up each wedge, curved end first toward the point. You're suppose to bend the ends in like a croissant but mine weren't wide enough. 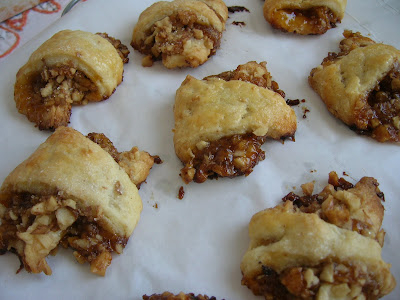 Chocolate filling:
Combine ingredients and spread on top of dough. Brushing the dough with a little melted butter first might not be a bad idea. Slice the circle of dough into 12 wedges and roll up each toward the point. 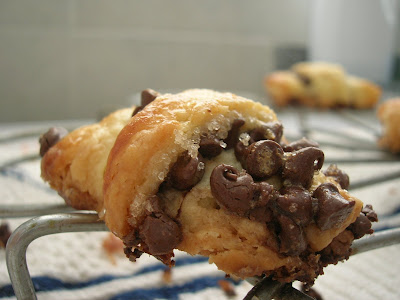 Brush the top of each rolled rugelach with the egg wash and sprinkle with a little sugar. Line a baking sheet with parchment paper, place rugelach about one inch apart and bake for 25 minutes or until golden brown. It's a good idea to rotate the pan half way through baking. Transfer cookies to wire racks to cool immediately. Rolled-up dough can be frozen and baked later.
Luckily, it was delicious so I'll definitely try again - after buying an oven mit. I'm not giving up!
Posted by meag at 10:48 AM 4 comments: