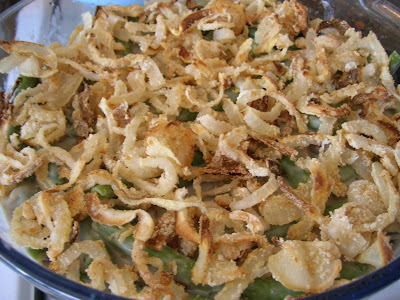 A few Thanksgivings ago I made a simple (basically prefabricated) green bean casserole. This year, I took a little extra time to make one from scratch using fresh ingredients, and it paid off. I followed this Alton Brown recipe, replacing the chicken broth with veggie broth. To save a little time on the big day, I went ahead and cooked the beans a day ahead - then put them in the refrigerator in the dish I planned to use. 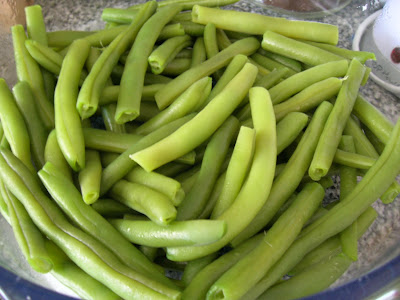 Bring water and salt to a boil. If you're using table salt, you'll want to use less than this! (oops.) Cook beans to your preference (Alton blanches for 5 minutes, I boil for 8-10), drain and rinse with cold water to stop cooking.
Onion Topping
Preheat oven to 475F / 245C. Combine onions, flour, breadcrumbs and salt (may want to use seasoning salt) and toss to combine. Coat a sheet pan with nonstick spray and evenly spread onions on pan. I sprayed a light layer of oil on top of the onions also. Bake until golden brown, tossing every 10 minutes, for about 30 minutes.
Mushroom Sauce
Saute mushrooms in butter with salt and pepper until they begin to lose some liquid, about 5 minutes. Add garlic and nutmeg and cook for another 2 minutes. Stir in flour and cook for 1 minute. Add broth and simmer for 1 minute. Add half and half and cook until mixture thickens - 6 to 8 minutes. Remove from heat and stir in 1/4 of the onions and all of the beans. Pour into casserole dish (I used a deep round one - I thought 9x13 would be too big), top with remaining onions and bake at 400F / 200C until bubbly, about 15 minutes.
Many commenters had issues with the onions burning, but I didn't have any problems. Just keep an eye on them in that hot oven and flip them whenever they're looking browned on bottom. I think this version is better than the one I grew up with and I'll never have to open a can of congealed cream of mushroom soup again...woohoo! 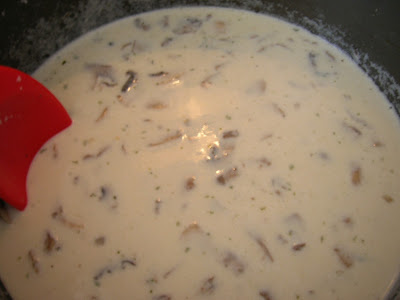 Last year I made a cherry chutney that a lot of people liked, but I hated it after pitting all those cherries and cooking them in vinegar for an hour. Ugh, the smell of warm vinegar! For those of you who enjoyed it, here's the recipe.
Posted by meag at 7:32 PM 5 comments: