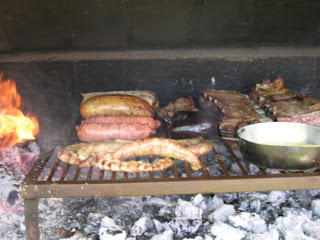 We spend nearly every Sunday at Guille's family's weekend house in a little town called Funes. In typical Argentine fashion, we eat a ton of food followed by siesta. They've made a little room on the parilla for my vegetarian food too. 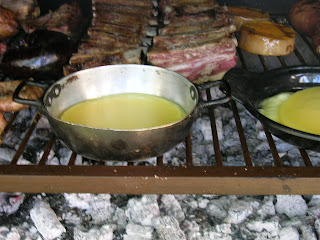 Add a little olive or vegetable oil and a sprinkle of oregano to a thick slice (about half an inch) of provolone cheese. Use a small pan to grill for about 10 minutes, until a crunchy crust forms.


Grilling veggies
This is what I've been eating recently. It's basically any vegetable rubbed with oil and grilled. If you have any other suggestions, I'd love to hear them. I'd would also add a variety of spices or something as simple as garlic salt for more flavor.

Composting!
A few months ago, Guille created a compost area (3'x3') in the backyard with yard waste (dried leaves). Now that its spring we toss in our peels, plant/flower trimmings, and other organic matter, then mix with the dirt (which is about 1 1/2 feet deep). We give it a good watering with the hose and aerate it (Gui taped a blade onto a pole--awesome) once a week. And the soil is already really rich and great for using as a base for new plants and flowers. We've kept it pretty simple but the U of I page is thorough and includes a list of items to leave out of your compost, like dairy and meat scraps. It isn't at all smelly and neither is our garbage can! 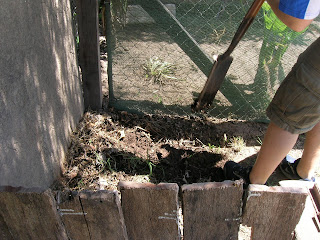 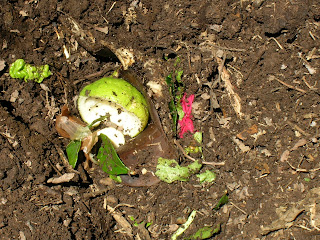 Sneak peak!
These little guys will soon turn into uvas (grapes!) fresh for the picking and squishing. And we may be making some Argentine wine of our own. 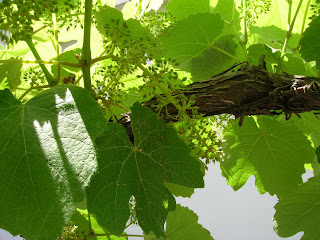 The month in review

As you may or may not know, we've been in our new apartment for a month now and the goodies are flowing out of our post-flooded kitchen. 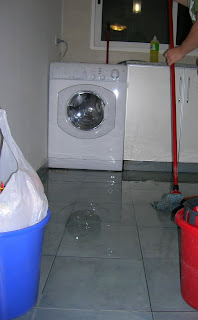 It wasn't easy to get to this point--the carpenter is just now assembling our bed and I've been working more than full-time unexpectedly--but we didn't let that get in the way of multiple kitchen experiments. 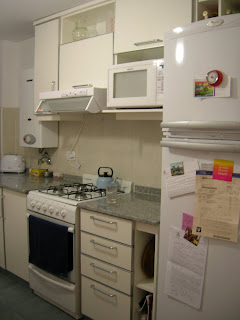 I was sad to leave behind the tastes of New York but I searched around for recipes and we have been able to make some of my favorite foods from home (granted, they're actually American versions of various ethnic foods). The best part about this, aside from our actually being able to cook together, is that instead of being dependent on take-out and Union Market, we've created homemade recipes. The challenge is to incorporate Argentinean ingredients into these recipes and avoid paying out the ass for imported supplies.

Without futher ado, here's what we've been snacking on: 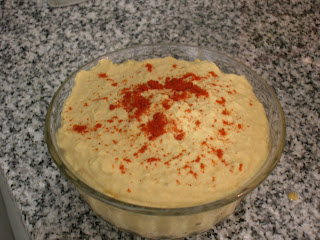 While peanut butter is a rarity here, it's way cheaper than tahini (which we found a jar of for 26 pesos--would you pay 26 dollars for sesame paste??) and it's 100% pure peanuts. I combined the most popular ingredients that I found in a variety of recipes to come up with the following:


Blend all ingredients together (we used a hand-held blender), adding warm water as necessary until it looks like, well, hummus. I haven't ventured into bread-making yet, so we tore up and toasted pita bread for dipping since pita chips aren't an option here. I sprayed a little oil and spinkled salt on top before toasting them in a hot oven. 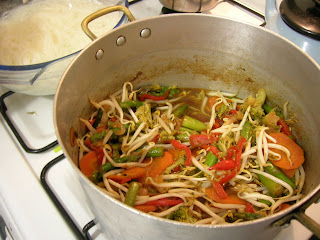 Well, since we've got peanut butter (thanks to Andres for thinking of my foreign taste buds) we modified a Wounded Chef recipe for peanut sauce and added it to rice noodles with stir-fried veggies--scallions, a carrot (sliced diagonally for mucho surface area), red pepper, asparagus (chopped into 1 inch pieces), and broccoli in that order. We added oil to a pot (since we don't have a wok) and got it really hot to fry the veggies in their particular order for about 10 minutes total, stirring frequently. We added a little water, 1 T of soy sauce, and a sprinkle of lemon juice to make it saucy--cooking on medium heat for about 5 minutes, lastly adding soy sprouts. 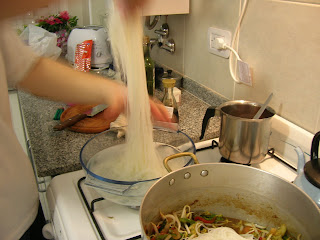 Then we added 200g of rice noodles that we soaked in warm water for a few minutes. Finally, we tossed it with this sauce:
Mix together in a small pan on low heat, stirring frequently and adding hot water until it's runny enough to use as a sauce (it will be light brown and look like peanut sauce from a thai restaurant). Don't worry if you add too much water, you can cook it down a little.

Add chopped peanuts and lemon juice on top and it will taste like pad thai. This recipe makes about 5 servings.

So, tonight I can rest easy knowing that these recipes won't get lost floating around in my jumbled mess of a Spanish-learning mind. That and I'm sure it will be nice to sleep in my own bed for the first time since I left Brooklyn nearly 2 months ago. :)
Posted by meag at 10:58 AM No comments: