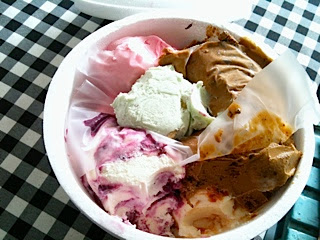 This past weekend was the first annual artesian ice cream festival in Rosario. Fitting for the Argentine city with the highest ice cream production per citizen -- there are around 70 ice cream factories for Rosarinos who consume between 8 and 9 liters annually. And perhaps more impressive is the quality of Rosario's ice cream, which is actually more like Italian gelato - with impressive creaminess and flavor.

And so, over 30 heladerías participated in the festival, which was postponed a week due to rain. You had to buy tickets for scoops - this year it was 5 pesos per scoop - and then you went around getting scoops from your favorite brands. It was super fun but it was also a 'get in and get out' kind of event. Thus, no photos.

This longest line was for Gelateria Italiana San Remo (the San Remo with locations on Buenos Aires and on Pte. Peron, which I blogged about here).

What's really impressive are their unconventional flavors like Tomato Jam swirl, Roquefort and an assortment of floral flavors. Since the line was so long at the festival, we went to their shop on Buenos Aires and brought home a kilo of gustos! Clockwise from the center (12 o'clock): Dulce de leche granizado, Mascarpone with berries, Rose, Tomato jam swirl, Roquefort with walnuts. And there are plenty of other flavors left to try. San Remo is also cheaper than some of the larger chains.

I really like ice cream, very sweet on the tongue

Oh, the ice cream in Rosario is so very, very good. My favorite shop is Esther: quinotes al whisky, dulce de leche, so much is so good.

Good article, I like this blog, glad you shared with us.