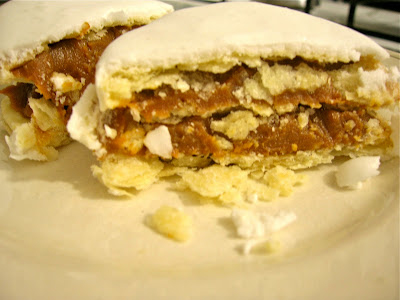 Yep, this was my second attempt at making the official alfajor of Santa Fe province. The first attempt, well, it taught me a lesson on meringues. I crossed a lot of lines with this recipe. First, I made a completely Argentine concoction, which is pretty much in opposition with almost all of my posted recipes. I usually try to replicate the tastes of home with what is available to us down here. Second, I had to get over my fear of raw eggs -- which, it turns out, isn't too hard when they taste like fresh marshmallow. So, thanks to Katie's challenge and encouragement, here I am embracing a taste of our current homeland.

The defining characteristics of alfajores santafesinos are (thick!) layers of dulce de leche sandwiched between thin crispy cookies and a sugary, egg white glaze that slightly crackles on your tongue as it dissolves. As a vegetarian, my challenge was creating a thin, crispy cookie without using lard. In my first attempt, I followed a recipe that called for melted butter - these shrank up hopelessly in the oven and weren't at all flaky.

So, I asked around for suggestions - but nobody had any clue. Seriously, no one I know in Santa Fe could help me out with a recipe. But everyone could describe the perfect alfajor, and warned me not to screw it up. Hmmm. No pressure. I did, however, get a Sandra Lee-like suggestion to use pre-made empanada dough instead and, in my desperation, I did so. I will get to that later.

In the end I settled on this recipe from La Majuluta, and swapped out lard for an equal amount of vegetable shortening. Also, I translated it all by myself so there's another big girl victory. I tried it her way (still shrinkage problems), but also switched it up with my knowledge of pie crust makings and that worked way better for me.
Cookies:
300 grams all-purpose flour
1 pinch of salt (that's a direct translation, so get to pinching)
60 grams vegetable shortening
2 egg yolks
100 ml warm water (do you know that American measuring cups actually list ml? nice.)
1 Tablespoon booze (some recipes call for anise liquor, but I used vanilla vodka)
A few drops of lemon extract (which I didn't use, but suggest) 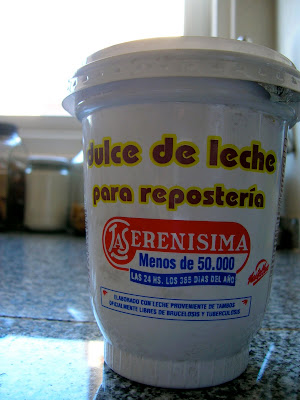 Whisk together flour and salt. Use a pastry cutter or two knives to blend in the chilled shortening (see, here's my pie crust expertise at work). Stir in the yolks, water, booze, and extract to form a crumbly dough - try not to over mix, just get it to stick together. Form a ball and flatten slightly, to create a disc shape (to make rolling out easier). If you have limited counter space, you may want to divide the dough into two discs. Cover and put in the freezer for at least 20 minutes, or until you're ready to roll it out (if you leave it longer, let it sit out for 10-15 minutes before rolling). Roll out on a lightly floured surface to 1.5 mm thickness (thinness!). Use a 7 or 8 cm cookie cutter to cut into circles and prick them with a fork to prevent puffing (I got 39 cookies out of it, after re-rolling the scraps.) Bake at 200C/400F for 10 minutes, or until they begin to turn golden. Let cool. Assemble a three-cookie-layer sandwich using nearly one full tablespoon of dulce de leche between each layer.

Make the glaze by bringing the sugar and water to a boil until the mixture reaches 112C - I got a candy thermometer to ensure success this time around. Start beating the egg white shortly before the sugar hits 112 (beat on low speed for maybe 1 minute). Let the syrup cool briefly, like 20-30 seconds or when the needle on the thermometer starts to drop. Slowly add it to the egg while you continue to beat it (no one wants to be defeated). It shouldn't take more than 30 seconds to combine them and get a nice shiny white glaze - like thin marshmallow fluff. Use a pastry brush to immediately brush the sandwiches with the glaze - this is super tricky and I found it impossible to get all of the sides covered, but work fast and at least spread a thin layer on top. Let them drip and dry (which takes about 2-3 hours) on a cooling rack.

Now, as I mentioned above, you can use pre-made empanada dough for the cookies. I tried it with La Saltena's small rounds (8cm) - poking them and baking for 10 minutes. This, however, resulted in a giant alfajor that disturbingly resembled a combination of the Stay Puft Marshmallow Man and a BK Stacker, and was too chewy to qualify as a cookie.

I'm glad that I added a classic Argentine dessert to my recipe box, and I'm especially glad that I wrote it out in English - that's one less hurdle for the next round. 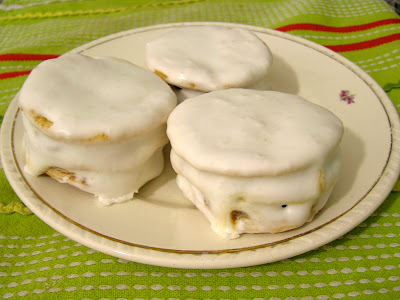 For more delicious alfajor recipes from all over Argentina, please stop by these blogs!

I don't remember eating alfajores santafecinos ever! So I was a little surprise about using "tapas para empanadas" - basically, because the texture *I* expect from alfajores is probably that of the alfajores from Córdoba? I guess santafecinos are more like "galletas" (biscuits) than cakey? Interesting! I'll try these soon!

Meag, your alfajores turned out great in spite all the mishaps. I could do with one right now with a steaming cup of coffee. Great for this cold Buenos Aires morning.

It's interesting to compare the different types of alfajores. The santafesinos definitely seem more cracker-like.

Meag, your description of the alfajor made with the empanada dough cracked me up! You hit the mark when you said that was a Sandra Lee suggestion. LOL

I give you major kudos for plugging away at the recipe despite some initial set-backs. The end result looks great! Thanks so much for participating in the group post. :)

What an interesting variation! These would be a fab afternoon snack with some strong black coffee or a mate on a rainy day.

I'm not sure if we have been in touch before, I hope you don't mind me reaching out! I found your details on your website and I hope you might be able to help me with my strange request…

I am a Producer working on a television show called House Hunters International which follows English speaking expats in their quest to purchase a house abroad. I wonder if you or any of your expat contacts might be interested in getting involved?! Please find a little blurb about the show below:

House Hunters International is a half-hour program currently airing on the Home and Garden Television Network (HGTV) in America.

The series is designed to de-mystify the international home-buying process by going behind the scenes of a house hunt where buyers and their real estate agents tour 3 homes.

At its core, House Hunters International is a travel show concentrating on the idiosyncrasies of the locales and what makes them special and different.


You can watch some examples of the show here:


Please get in touch if you have any more questions about the show. I look forward to hearing from you!


Best wishes and many thanks,

I ate these when I lived in Rafaela! Absolutely delicious--I would say one of my favorite variations of the alfajor. Do you have a suggestion for an alcohol substitute? I never have any on hand.