Desayuno, the last bargain in Argentina

When I first visted Argentina in 2005 (met Guille) and then again in 2006 (came back because he was so hot), the country was my playground. I didn't need to worry how many pesos I spent, even on a graduate student budget. Sadly, inflation has once again driven up the cost of everything in Argentina, while salaries lag behind. Now that I'm earning pesos, there's no way I would waste them on things of poor value. Forgetting the exchange rate (3 pesos to 1 dollar), let's say that prices are basically the same--if you would spend $5 on something, I would want to spend 5 pesos on it here. It doesn't work quite like that, most things are a little more expensive, but it's not far off. Three years ago, Gui and I would often go out for merienda (the afternoon meal -- think happy hour with coffee and pastries instead of beer) along with the rest of the country. This is a coffee from Havana, a popular cafe with delicious alfajores that's now out of our price range and caters to tourists: 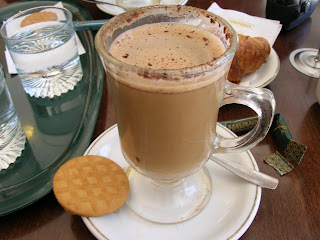 A simple tostada (grilled cheese sandwich) costs between 9-15 pesos in various restaurants, add in coffee and you're looking at a hefty bill for a daily meal. A smoothie at one of our favorite spots more than doubled in price--we might as well have Jamba Juice shipped down. Even in New York I wouldn't have paid $9-15 for a sandwich snack, or $14 for a smoothie, so meriendas are now few and far between. But there is one traditional meal that's still affordable and delicious - breakfast! 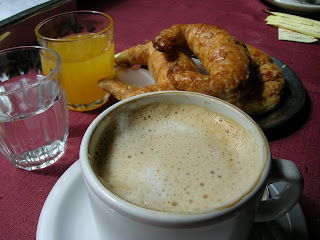 There isn't a lot that can motivate me to get out of bed, but the thought of warm medialunas and their sticky sweetness causes me to actually move my ass. Desayuno (breakfast) typically includes cafe con leche, 2 or 3 medialunas (small, crusty croissants), a tiny glass of soda (sparkling water), and sometimes fresh squeezed orange juice. Being a value monger, I found the restaurant in my neighborhood with the best delicious deal--3 medialunas, coffee, oj, and soda for 5 pesos! It would cost nearly 3 times as much to have all of this in any restaurant for merienda. 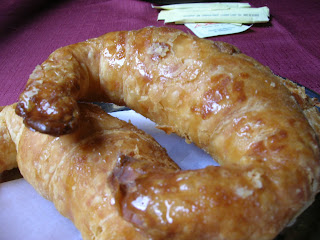 The search is on for the best medialuna in Rosario. So far, I believe (and Tomas and Virgina confirmed) that Distinction is the winning panaderia. Guille holds Nuria in high esteem but we'll be seeking out smaller bakeries as well. The varying ingredient from bakery to bakery is the fat. Butter vs lard/shortening. Good thing my ass is moving, at least. 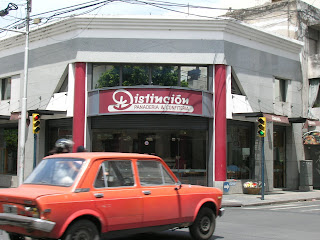 I'm definitely making the vodka sauce tonight for Sarah and I. Glad to see you're doing well and miss you at the Hall.