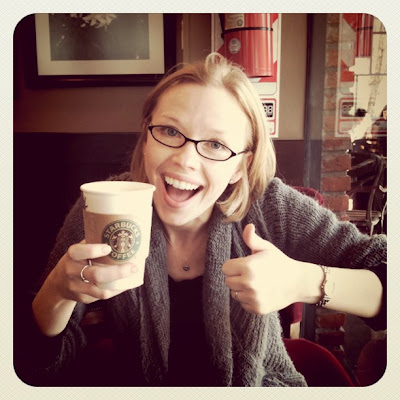 In case you missed it on Facebook, I'm all smiles this weekend because we finally got a Starbucks in Rosario and I'm well-caffinated. The prices are as ridiculous as you'd imagine: 14-20 pesos for lattes and cappuccinos. But, if you think about it, a tall is way bigger than most coffee drinks you'll find around town and you might just wonder who in Rosario can even fathom finishing a venti. I ordered a latte and was shocked that it came with whipped cream -- which I'd nearly forgotten about -- and I didn't even have to say 'with whip.' Hmm. I wonder how I order it without whip. Sin crema? And just in case you're afraid that you won't get your money's worth, this Starbucks experience comes complete with fake American niceties...Have a Nice Day! :) Oh, how I missed that.

They've got most of what you'd expect to find in their pastry case (including bagels and muffins) and they've somehow managed to import bottled tazo teas and Altoids. Maybe you think that Starbucks is over-rated or the epitome of capitalism, but if you've spent the last few years drinking the exact same coffee in every "cafe" by the thimbleful, you're likely as excited as I am. This is better than Christmas.

Starbucks is now open at Alto Rosario, and I heard a rumor that they're opening two other stores soon - one on Orono and another on Cordoba.
Posted by meag at 6:20 PM

I couldn't help but giggle when I saw the picture that accompanies this post. I think I'd be as giddy as a school girl if they opened a Starbucks in my town. Here's hoping one comes to Mar del Plata, because Starbucks sure as hell isn't opening up in Necochea!

Hey, I'm Fer from BA Cast, the Buenos Aires Podcast (www.bacast.com) I wanted to see if you'd be interested in giving us a Skype interview, as we're beginning to produce a piece on expats who live in other cities than BA.

If you're on, lemme know at contact@bacast.com