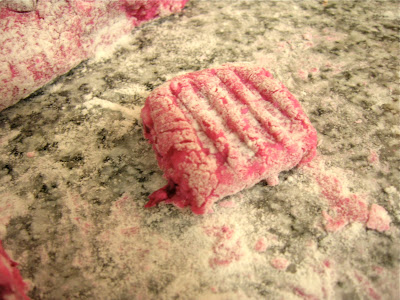 I'm so happy to be doing another group post with Argentine flavor! The last time, we tackled a national specialty - the alfajor. This challenge is no easier and is just as emblematic. We're cooking gnocchi! Maybe gnocchi doesn't sound very Argentine to you, but this dish is actually so Argentine that it has its own day of the month. Each time the 29th rolls around you're sure to see restaurants full of diners with plates of gnocchi (or ñoquis, as they're known here). Why? Because it's Dia de los Ñoquis, or Gnocchi Day. Just as with the US, Argentina is a country of immigrants and this dish is strong reminder of European influence.

"Ñoqui" is also a slang word (from lunfardo) that is used to refer to someone who expects to get paid without actually doing any work. Think immigration office. (Ha! I probably shouldn't say that since I'm still waiting for my DNI to arrive.)

So, however you want to look at it,  happy pasta day or happy lazy day. Let's all forget work and eat pasta!

Here's what my fellow bloggers are making for Gnocchi Day:
I really did attempt to make gnocchi but, as usual, I just don't have the patience for this dish and I ended up with malfatti (bigger gnocchi). Beet is not a traditional gnocchi flavor but I had to try something different -- and pink, apparently. 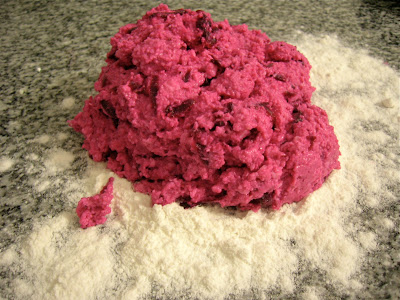 Roasted Beet Malfatti
Recipe seems to originally be from Bon Appetit. Also see Eat a Beet and The Fifth Tine
Wrap beets in tinfoil and roast at 200C/400F until tender 45-55 minutes. Let cool for 15 minutes and peel skins off. Coarsely shred and measure out 3/4 cup and place in a large bowl. Stir in ricotta, egg, cheese, salt and pepper. Add 1 cup of flour -- it will look like that big pink blob, pictured above. At this point you're suppose to either lightly shape and roll into a log (which would be super long if you tried to do the whole thing) or roll each individual gnocchi in the remaining 1/2 cup of flour. My dough soaked up all the flour on the counter and then asked for more. In total, I probably incorporated 1 1/2 cups into the dough and used another 1/2 cup just for rolling into logs, which I did in a few batches. This lead to malfatti. 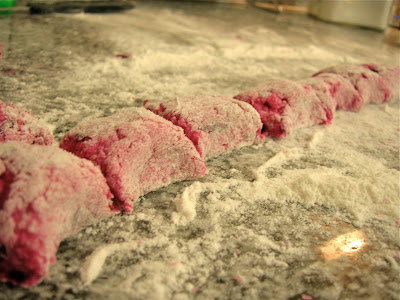 Anyway, cut one-inch pieces of the dough log to form each gnocchi. You're suppose to roll along a gnocchi board or fork to get those classic indentations, but this dough was too wet to roll so I just pressed it with a floured fork. I noticed that one of the other recipes just left the pieces as balls. Anyway, get it to whatever shape you can and then line them up on a baking sheet. I then popped them into the refrigerator for about 15 minutes and they came out easier to handle.

Saute garlic in oil for one minute, add butter and melt. Add flour constantly whisking to create a roux and cook for 2 minutes. Add milk slowly while whisking to keep lumps from forming. (This never works for me in a pan that's not non-stick, so I add part of the liquid until it's warm and then remove to a bowl and whisk like crazy until dissolved, then return to the pan and continue adding liquid.) Stir in sour cream until melted. Once sauce is thick enough to coat the back of a spoon, add nutmeg, herbs and cheese and stir until melted. Taste and season with salt, if desired. (I went with a roux-based sauce instead of cream because of all the cheese in this recipe, but it would probably be amazing too.)
Bring a large pot of salted water to a boil and drop in gnocchi in batches so that the pot doesn't get too crowded. Cook for 4 minutes - or until they float to the surface plus an additional minute. Remove from the water into the sauce. 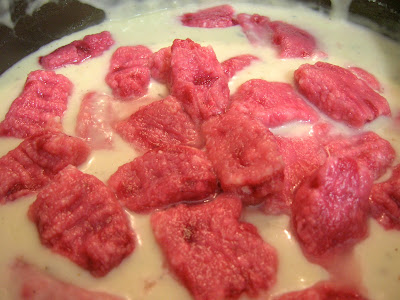 Don't stir it around too much or your sauce will turn pink. Whoops! Garnish with a handful of toasted walnuts and additional cheese. This recipe is quite rich so I used reduced-fat ricotta and sour cream. I'm not sure the ricotta was the best idea, as it was quite grainy - you may want to go with full-fat. Also, many ricotta gnocchi recipes suggest draining the ricotta and I would try that for this recipe too - perhaps it wouldn't require so much flour. 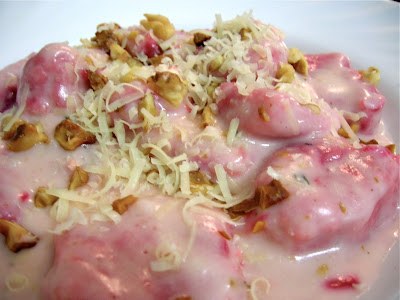 In the end, it was quite heavy but Guille loved it. He said it reminded him of when his mom would make gnocchi when he was younger. And she only makes it every 5 years. Smart lady. Gnocchi is exhausting...and now I'm going off to act like a ñoqui.
Posted by meag at 12:17 PM

nice! I tried gnocchi once and it was a disaster but it's on my list for this year.

I was very curious about these beetroot gnocchi from the start and now that I see them, even more! I want to try them!
I made ricotta gnocchi a couple of times and yes, the dough becomes very sticky and wet, so perhaps it is a good idea to drain the ricotta first. As for the beets, I suppose that by roasting them you get rid of most of the water, right?
They look delicious!
Good luck with getting your DNI and until the next group posting! :)

Technicolor gnocchi—love it! These would be great to have on Valentine's Day. And yeah, making gnocchi is no joke. My mother-in-law makes them fairly frequently because they're one of her favorite foods, but they are very labor-intensive. We need to pick something easier to make for our next challenge! lol I think yours look really good though, and the sauce sounds divine. I love anything with roquefort.

I hope you put money under your plates. Maybe it will bring you luck, and you'll finally get your DNI!

What a lovely colour! Your malfatti look really good. Can you taste the beet?
I like the idea of making a roux based sauce (although I absolutely love cream!) I don't hink I'll ever make gnocchi again but I may steal your sauce :)